How I broke into design

“Why haven’t you done your maths homework?!” That’s what I’d be asked most evenings during my formative years, when I’d rather create new Transformer characters, or design new Nike Air shoes. The ability to create something from nothing and then give it personality and style was what captivated me.

During the last years of secondary school, my art teacher would let me skip other classes so I could perfect my sketching and design skills.

Thanks to being the youngest of three children (and thus being a master manipulator), I always had an excuse ready for when other teachers would ask why I’d missed their lesson.

“Although I had a wide range of interests, a career in art and design was my destiny. Until I met a careers advisor…”

My grades across all subjects were slightly above average, apart from Art & Design, where I excelled and would transform into a miserable brat if I ever achieved anything under an A grade. Although I had a wide range of interests, a career in art and design was my destiny. Until I met a career advisor…

On one particular day, pupils were invited to meet a careers advisor who would help us choose the right path when going out into the big wide world. I was ushered into a small room and met by a very bland looking middle-aged man, with a dull grey suit and a tone of voice to match. To me, my path into design was clear so I didn’t expect much help. Despite hearing my obvious enthusiasm, he dismissed my life ambition as quickly as he could roll his eyes. He told me – with absolute certainty – that I’d be wasting my time pursuing design as there weren’t any jobs or money to be made in the industry. He and other influential figures in my life proclaimed that I should follow my Sister, who excelled at all things academic, and become a manager at a leading bank in London.

And just like that, my entire career had been decided for me.

I decided (with rose-tinted glasses on) that I could make money in a standard business role and fulfil my creative dreams during my evenings and weekends. Oh, how naive I was.

I secured my first job as a production coordinator at a food and beverage trading company overlooking Tower Bridge. On my first day, I arrived wearing an ill-fitting grey suit and a carrier bag containing a just-ham sandwich and a grey umbrella. My careers advisor would’ve been so proud.

It became clear pretty quickly that there was no future for me in this industry. Any idea of fulfilling my creative dreams during my evenings and weekends were dashed by a job that drained my creative juices and demanded late nights to meet deadlines. The final nail in the coffin came when the MD would regularly send me away to a tiny, dark room alone to gather samples of citric acid which could be used to clean his yacht.

My time wasn’t completed wasted though. Not that it didn’t feel like it at the time, especially when I was being made to earn my stripes through some excessive delegation from senior colleagues who spent their afternoons in the pub. But thanks to a good work ethic and actively seeking advice from mentors, I climbed the ranks and became a manager soon enough.

Whilst I was busy wondering what education I was missing at university, I developed important, real-life skills in the workplace, where it mattered. Managing and motivating colleagues, building relationships, meeting deadlines within set budgets and problem solving helped build the foundations for running my own business later down the line.

Despite the promotion, I remained unfulfilled and I decided that my job would have to suffer in order to achieve my dream. I enrolled at the London College of Communication and took a series of courses in the evenings that would span across 3 years.

My eyes were opened immediately as I stepped through the university doors. Incredible designs, created by students, adorned the walls and provided me with a huge sense of inspiration and purpose.

“Each of us had experienced an unfulfilling career and were desperate for change.”

I met other students in a similar position to my own, who wanted to escape other careers and venture towards something creative. We shared a drive stronger than many students who take the 3 year degree in graphic design; each of us had experienced an unfulfilling career and were desperate for change.

It was during these classes that I learned the fundamentals and principles of good design. I’ll forever be thankful to the amazing lecturers, particularly to Paul Chamberlain for his seemingly unending wealth of knowledge and his willingness to share it, both in the lecture hall and in the pub.

One of my finest moments as a designer (even to this day) came during the end of year exhibition, where the best designs throughout the year were showcased to the university and public. I was shocked to find my poster layout promoting the London Olympics given a feature, receiving praise from some respected figures at the university. My work was now adorning the same halls that had so inspired me when I began the course three years prior.

That sense of achievement and pride was nothing I’d felt before; I wanted more of it!

I gave in my notice (a bit too proudly) and quit my role in food and beverage distribution and looked to the future with excitement and eagle-eyed focus.

I deleted my very corporate CV designed in Microsoft Word and set about creating a CV and portfolio that would attract a creative director. Whilst some recruiters were confused and possibly put off by my unconventional career path, I landed a role in production and design at a leading promotional merchandise company in Shoreditch.

It felt like I’d been adopted by a family rather than enduring the standard awkward greetings on a new employee’s first day. This friendly, outgoing and ambitious team, coupled with a creative role gave me unbelievable satisfaction. Plus, there were wasn’t a grey suit in sight!

Starting a design job in a promotional merchandise company wasn’t a conventional route into a design career. But then, I hadn’t followed a conventional designer’s career path. However, creating artwork and managing the end-to-end process developed that sense of responsibility for managing the client’s needs. I had the opportunity to produce innovative designs and creative promotional merchandise for major clients that helped develop my role into a senior creative and management position.

“I created my own degree”

Despite being guided to a different career path and some long hours learning graphic design, I’m thankful that I went the extra mile to achieve my dream. It wasn’t the conventional or recommended path. In a sense, I created my own degree through learning key soft-skills in the workplace during the day, whilst mastering graphic design in the evenings and weekends.

The common advice is to encourage young designers to enrol at university, which I wouldn’t argue with. My point is that there are other ways to be successful in design, especially in the modern age. Some of the largest global businesses are recognising that candidates with hands-on experience through online courses or similar methods can make the same impact as candidates with a degree. Google, Apple and IBM are amongst an increasing number of companies who no longer require applicants to have a degree. Having that work-place experience, becoming multi-skilled, developing people and management skills will help future proof your career in an age where gains in technology are at such a pace that great design skills alone won’t stop you from becoming obsolete.

An easier and more effective way of reaping the same benefits of my journey is to apply for an internship, whether you’re at university or not.

One incredible reward of an internship is that you have the opportunity to learn on the job, with an experienced designer to guide you. Learning by ‘doing’ is quicker, easier, for most of us and means that repeating the same skill next time isn’t as intimidating. You’ll feel a greater sense of achievement completing a real-life project and grow in confidence with every successful task. Becoming a skilled, reliable and integrated team member could even bring you paid work from that company, or at least a glowing reference.

Sometimes you don’t know how far you’ve come until you look back…at your Inbetweeners haircut whilst listening to some garage classics. The journey is different for us all, but the secret to achieving my dream was pretty simple. It just takes an open mind, a passion for creating, perseverance and above all, self-belief!

27 ways to land your first job in Graphic Design:

Deciding who you want to be is often not an easy decision for most of us. You may have a passion for design, but how do you go about making the jump? If you’re a budding designer, here’s my advice to securing your first graphic design job:

Starting from the bottom

We’ll be sharing more super helpful tips and resources to help fellow creatives and businesses promote themselves. Sign up below to be the first to know.

Did we miss any points? Have your say below: 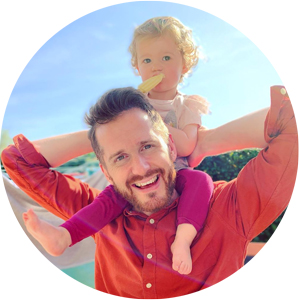 James is passionate about helping businesses launch, grow and build long-lasting relationships.He has created and collaborated on campaigns for iconic brands, such as Facebook, Merlin Entertainments, Instagram and the University of Oxford.